A STRANGE THING HAPPENED ON THE WAY TO THE HOLOCAUST 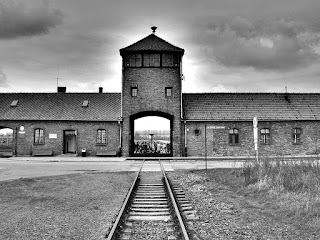 Have you ever researched your views and position on the Holocaust? I recommend you do not if you are not the kind of person able to be challenged by some startling facts.

This is not to say there were not internment camps, nor is it to say even more precisely, that Jews were not the primary target of the internment/work camps by the Nazi party leadership but it is to say, that the videos to which I will link, are ambitious and formidable in some of the things they present which demonstrate valid disputes of the official narrative of 6 millions Jews being exterminated.

Why are people imprisoned simply for expressing disagreement in some countries? While it is ludicrous more importantly, it is indicative of someone or some group wanting so desperately to control the narrative of an event which speaks of deception, not honesty.

Also, why are those who ask questions not referred to as skeptics but "deniers" and other forms of defamation?

Let me be clear, I am not a denier nor a revisionist, I am a factualist. Give me the facts. It is requisite that one be willing to entertain ideas which are not their own and with which there may be controversy, even outright error claimed by experts.

This isn't to make one a fool rather, it is to enable that person to come to the truth.

In my mind, for example, I ask if God is real. Does God exist? I entertain the idea he does not so that I may answer that question. There is no fear in that if I am interested in the truth and in this case, I always find God not only exists but is immutably eternal and revealed so in the Bible. If I never entertain this idea then when it seizes me, because such doubt seizes us all at some point, I may find myself running from the answer and not to it seeing I have never been on this road.

Some of the issues with the narrative of 6 million Jews being exterminated which I have observed in these Holocaust rebuttals are:

So, here are the video links for your consideration:


Remember, I am only interested in facts. If you watch only one, watch the first and then feel free to offer commentary. Thank you and may God be glorified by the truth.
at February 12, 2018

I tried calling up these videos but got the message in each case in German that 'this content is not available in this country domain'.

The denial, approval or playing down (verharmlosen) of the holocaust is an offence in Germany for fairly obvious reasons. It is excluded from the clause in the basic law guaranteeing freedom of expression. There are still plenty of guilty consciences who would like to pretend it didn't happen.

It might be the providers of the youtube footage don't want to risk legal action in Germany by the content, or it may just be some other legal quibble over what can be shown.

I don't know whether reexamining the numbers of deaths would come under this freedom of expression exemption, but it is an extremely sensitive subject, all the more so with the re-emergence of some anti-semitism in more recent years.

I was however able to call up one of the videos direct, namely the whole of the David Cole piece.

I'm not sure what to make of it all. I wonder if the concentration on Jewish suffering after and since WW2 by the anti-German coalition is to divert attention away from their own wartime misdeeds or atrocities. This is obvious in the case of the Soviet Union (totally untrustworthy), but the Anglo-Saxon allies need, imo, to reexamine the morality of the bombing campaign against German civilians, the UK in particular. (This may be historical for what happened 75 years ago, but both countries are still at it in the Middle East.)

I think it true to say in general that most wartime claims as to deaths and the destruction tend to be revised downwards in the light of further research, with time to examine the records. The number of deaths in the bombing of Dresden is an example of this. In the case of Auschwitz, anyone researching this has got to make sure they are not perceived as defending or justifying in any way the mass murder that undoubtedly took place. Providing they are not doing this, labelling them as 'deniers' does seem strange, as does the fact that Auschwitz has become in more recent times a kind of tourist attraction.

Ken, thank you for stopping by. I think if a serious film was done regarding the atrocities of the carpet bombing bye Churchill which were Justified as a necessary evil to win the war against the greater

It might mitigate some of the obsessive Pursuit regarding the concentration camps and the number of deaths which people keep on insisting it is the magic Six Million number and it is not. Boy the carpet bombing movie would be something. Germany is eaten up with false guilt.

Hi Alex - glad you are posting again which presumably means your health has improved. At least I hope so.

Regarding your comments above, a big problem in dealing with what happened in WW2 is emotion. For example, I now think the bombing campaign morally questionable, if not from the beginning when there was no other way to fight back then towards the end of the war. But show me footage of Auschwitz or Belsen (I have visited the latter) and any sympathy for the German civilian population immediately evaporates. The emotional reaction is they deserved what they got.

In the bombing of Pforzheim in Feb 1945 British bombers destroyed the town in 45 minutes killing 17,300 people. Or the American bombing of Bruchsal in March 1945 which totally destroyed a beautiful barroque town killing 1000 people. You wonder if this was justifiable so late in the war.

On the other hand, Britain was still being bombarded by flying bombs and supersonic rockets, with indescriminate loss of civilian life. My parents experienced all this.

"Bomber Command" by British historian Max Hastings gives probably the best single treatment of the history of the bombing campaign. I found the chapter on what it was like to be on the receiving end difficult to read.

The problem of German guilt is more that the generation who were responsible for 1933 to 45 buried their guilt in hard work after the war ("econimic miracle"), and a refusal to face what had gone on. It was taboo. Subsequent generations who were not responsible are often consumed with guilt - one reason, imo, why Germany likes to lose her identity in the European Union.

I suppose it ought to go without saying that we who enjoy the freedom that was purchase by blood and toil back then ought to be careful in saying what they ought to have done, particularly as we have hindsight. But a reappraisal would do no harm lest we think we in the West are always right in what we do.

Anyway, that's enough from me!

You are likely correct about post-war Germans and how they dealt with their defeat. However I will say this I am not sure that the comprehensive guilt thrust upon them by the world was warranted. In fact I'd say it was not. I believe it should be a case-by-case basis if the German people wished to feel guilty but their rise before the war as a nation was a valid response to the injustices heaped upon them after World War I.

I suppose it is a complicated issue for any attribution of absolute guilt. Now to your carpet bombing references - definitely England was still suffering the indiscriminate attacks but boy did they shake their moral fist at Germany while doing the same thing. In the end the right parties won but allocated the benefits of victory incorrectly in many ways

I hope you are ok. Haven’t heard from you in a long time.

I am well. Actually am in the process of a little more activity. A season of reflection was in order. Have a post for Friday or Sat. Thank you for your thoughts.

Alex A. Guggenheim
I am a "pedestrian Christian" and am enjoying my journey, particularly with my dear partner and spouse. Our family banner reads: "Some trust in chariots and some in horses, but we trust in the name of the LORD our God." Psalm 20:7. At the bottom of the blog you will find more about The Pedestrian Christian. To contact me please use the comments section.

Others Along the Path (engage with all discretion)

Resources Along the Path